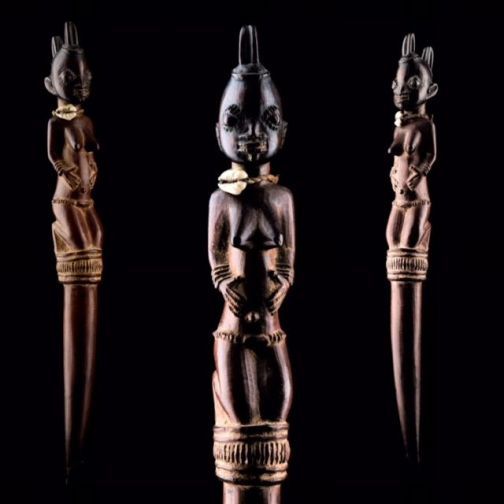 Fascinating, mysterious, and yet dense and intriguing: that’s how the cosmic vision of Yoruba people is.

The word Yoruba indicates both a language and a series of African ethnic groups, precisely those located between the Niger and the Atlantic coast of South-Western Nigeria.

The region occupied by the Yoruba people offers an infinite variety of artistic expressions, artworks made of wood as well as metals, leather, pottery, glass or wall decorations.

The Yoruba are, in addition, a people with radicate divinatory traditions that – and this happened already in the past centuries, due to the slave trade – had spread in the Carribeans, in Cuba, in Central America and in Brazil, introducing themselves into already-existing local traditions, giving birth to a series of autonomous religious and divinatory practices called Santeria.

The term Santeria was first coined by the Spanish with the purpose of denigrating their slaves’ excess of devotion towards the Saints, forasmuch as they seemed not to understand the fundamental role played by God in the context of Catholic religion. The slaves’ attitude had, in truth, arisen because of their owners’ imposition ( that is to say:  compulsory prohibition ), and on pain of death, of practicing their own animist religions, originated in Western Africa. This ban forced the slaves to circumvent the obstacle by hiding their gods behind a Catholic iconography, in order to adore them without fearing for their own lives.

The focus of my work is a specific divination practice, that – in Yoruba cosmogony – is called Ifa.

Ifa is, at the same time, both a divinatory system and an Orisha, that is to say a deity configured as a mediation principle between the other Orishas that compose the Yoruba pantheon.

This is the reason why Ifa is consulted to obtain informations concerning both the visible world and the spiritual universe of the Orishas.

The divination practice is assigned to the Babalawo ( the father keeper of the secret), the Ifa minister, who uses a series of tools, the most important of which are sixteen coconuts (Ikin), the divination plate (Opon Ifa), the divinatory instrument (Iroke Ifa) and the Osun Babwo, an iron shaft that the minister sinks into the ground during important meetings or ceremonies presided by other Ifa ministers.

Opon Ifa, 1913, Frobenius, Leo (transl. Rudolf Blind). The Voice of Africa, Being an Account of the Travels of the German Inner African Exploration Expedition in the Years1910-1912, Vol. 1 of 2., Cortesy Ross Archive of African Images

The opon ifa, whose shape could be circular, semicircular or rectangular, is made of wood and measures between twenty-five and fifty centimetres; it carries on the upper side the face Esu (or Eshu), the divine trickster, considered however “a force which plays a neutral role in the conflict between the supernatural powers of Good and Evil” (Wande Abimbola, 1976).

During the interrogation the imagine of Esu faces the babalawo 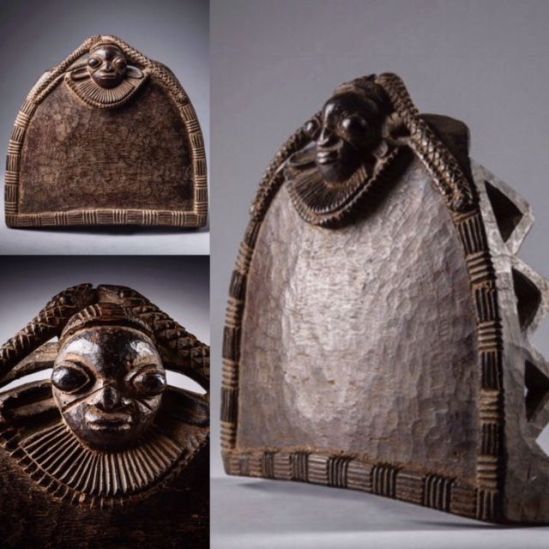 The equipment is completed by shells and various objects that testify the elevate statute of the minister.

The divination ceremony, as someone might easily guess, consists in a complex ritology that, in its essence, culminates in an interrogation that the minister performs while sitting in front of his client by throwing the sixteen coconuts on the divination plate and hitting its border with the divinatory instrument, the iroke ifa.

The palm nuts have a sacred connotation, for they symbolize the connection between the Ifa and the human world.

Thanks to the combination of the sixteen coconuts and the sound he makes while hitting the plate, the babalawo obtains the answer to his interrogation, and he refers it to the person sitting in front of him and asking for his advice.

Clearly, what described above is nothing but a pale representation of the divinatory gesture, whose deepest meanings are hidden behind the thoughts and the traditions of the babalawo. ( https://www.youtube.com/watch?v=k9lGVF6jYN4&feature=share)

The other principal instrument of the divinatory rite, as we have said before, is the iroke ifa, used by the minister to hit the border of the plate during the divination. Frequently carved in ivory, and more rarely in wood, it measures between 20 and 50 cm. 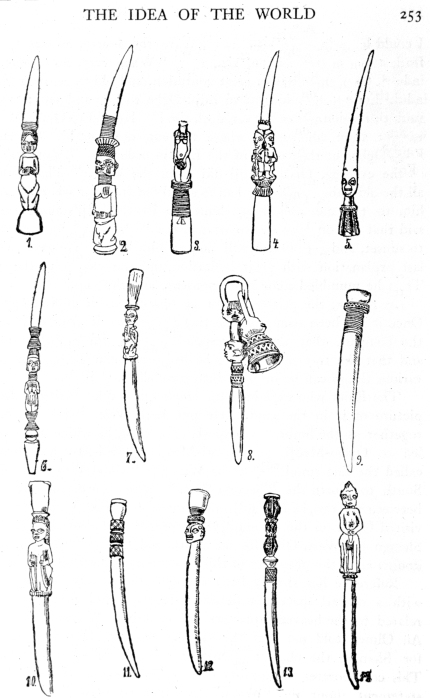 Iroké  Ifa, 1913, Frobenius, Leo (transl. Rudolf Blind). The Voice of Africa, Being an Account of the Travels of the German Inner African Exploration Expedition in the Years1910-1912, Vol. 1 of 2., Cortesy Ross Archive of African Images

In the case here presented, this iroke ifa is certainly a fine example of Yoruba carving practice.Coming from the Lentini, Monbrison and Serra ex-collections, this wooden sculpture measures 29 centimetres and represents a female figure kneeling on top of a long curved cane.

The patina is marron fonce’, degrading along the length of the object, with tracks of caolin, red powder and indigo.

The kneeling girl is undressed, around her hips only a thin loincloth carved with minute lozenges; the same decorative pattern, but bigger, is carved on the base where she is bending. At her neck, a necklace made of rope holds a cowry.

Her head head and her face are carved with great expertise.

Her eyes are encircled and open wide (maybe to investigate the invisible world?); same are her ears with their small lobes, barely outlined; and her finely drafted mouth with its characteristic labial plate; and finely the precious double-horned hairstyle, distinctive of the Yoruba people. All those elements trace out an intense, regal and severe expressiveness, underlined by the slight asymmetry of the head compared to the axis of the body.

Of the latter we should emphasize the perfect proportions, the generous breasts, pointed and spread out, the arms embellished by four bracelets, the hands with tiny nails and open thumbs which caress the belly, the folded legs, the feet and the toes bended in the natural posture of someone who is on their knees.

And also beautiful is the flexibility of the back, which rests on the small nates.

In regards of this feminine figure we can revoice what J. Pemberton III wrote, that is to say that she is both sensuous and caste, an artwork in which the artist managed to join together both modesty and power – two elements that, in Yoruba culture, belong to the women.