The unbiased innocence of the gaze of a child in front of some african sculptures floors every certainty, exposes the king’s faux robes and leads me towards some considerations concerning this topic, with no other aim but my independent view on tribal art.

The beautiful classical Greek sculptures of the V century BC, characterized by proportion and harmony, and cradle of all Western artistic culture, had no veils to cover them; the naked body – male and female – was venerated, and not just admired.
For centuries, since the transition from the Latin culture to the Christian one, religions and systems of belief have deeply influenced the representation of naked images – reaching the apex of obscurantism, in my opinion, around the second half of the XVI century, when Daniele da Volterra made the nudes of Michelangelo’s Last Judgement wear breeches.

And it is not only the Counter-Reformed Christian religion that stands out because of its
abnegation; the same Jewish religion (apart from an initial parenthesis) is not better, not to mention the Islamic one, where the human figure (more or less clothed) is banished from every kind of representation.
And it is extremely contemporary, in the end, the scandal which arose from L’origine du monde, the painting of Gustave Courbet , plastic and immediate representation of the vagina of a young woman, probably the model Joanna Hiffernan. 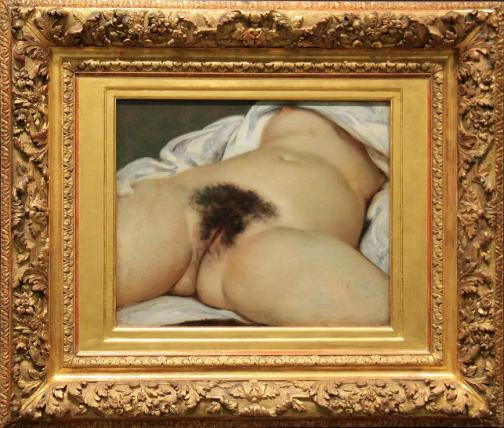 Prohibition, shame, bashfulness and guilt have always accompanied the artistic nude, and not only in Western culture.
But then why, on the contrary, the tribal art, the African one in particular, hasn’t followed this trail- at least until the meeting with fervent Western devouts?

Could it be that, in that cultures, prohibitions, shame, bashfulness and guilt do not exist? Of course not, the wide range of human behaviours and feelings makes no exceptions – not even for tribal cultures; on the contrary, in some cases what is banned and what is forbidden become way more meaningful – just think about the punishments expected for those who break the rules of the secret societies which hold the fate of the whole community!

I think that the reason why the naked figure can instead be represented in more or less every form of African sculpture (and from the Guinea Gulf to Angola, from the Sudanese cultures to the ones of the forests of Gabon and Congo… cultures which didn’t know about the reciprocal existence, if not, in a couple of rare cases, because of long-lost common origines) needs to be found somewhere else. 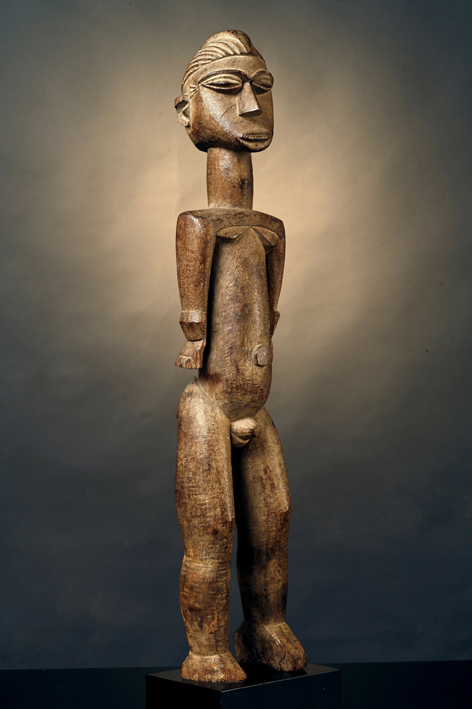 And, in my opinion, and always minding the proper and right differences, one of the reasons that has led Greek and tribal culture to create so many masterpieces where the naked figure stands out is the complete absence of any kind of ideological element connected to the theme of nakedness, and the unconscious force that arises from it.
To be clearer: I am aware of the enormous distance which interocurs between the artistic creations of Praxiteles, Myron or Phidia and the one of some unknown artists from the forest.
And, moreover, I am well aware of the aim of that arts, so different from one another in their purpose, in their consequences and in their outcomes. On the plastic level, however, the representation of the nude is something which is consistent in both of them, and expresses itself with firmness and creativity. 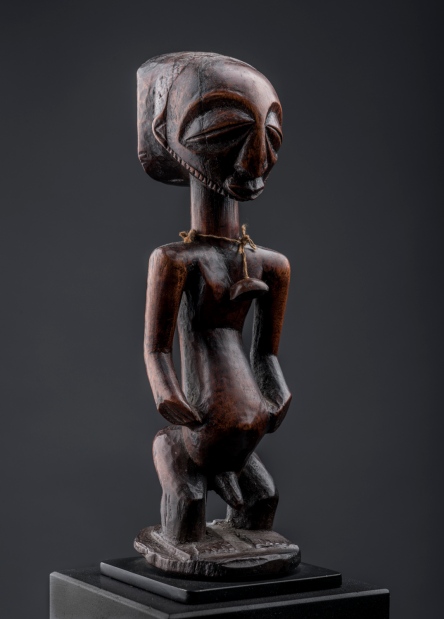 And when I refer to the absence of any ideological convention, I aim to refer to the artist’s possibility of reproducing, on the basis of his own skills and according to the most convenient ritual standards, the human nakedness as a mere factual element of reality. The man, the woman, are made in that way , and there’s nothing that can prevent to represent them ipso facto .
Guilt, shame and prohibition are irrelevant, and they have nothing to do with the nude – rather, maybe in this case we shouldn’t even talk about “the nude”, but, in my opinion, about the image.

There is no shame simply because shame doesn’t belong to the image; there’s no prohibition because the image doesn’t implies prohibitions.
And we shouldn’t talk about freedom of representation either, because there is no freedom in representing reality as it is seen, perceived or interpreted.
Stripped bare of every kind of ideological value, no matter if secular or religious, the image becomes origin and destination of its own self, conceived either for a public agorà or collocated on the family altar of an isolated African village. 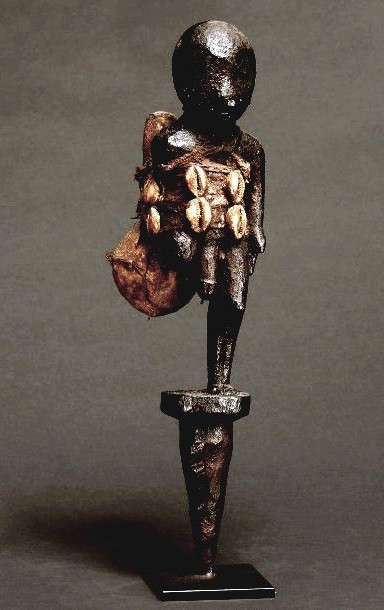 The specificity of the representation of naked figures, both male and female, in African tribal plastic, has, however, an origin and a history which are different from those concerning Greek art, where the representation of the nude was eminently an aesthetic choice, connected to Policletu’s Canon , according to which harmony and proportions were the fundamental precepts that needed to be respected.
Nothing of the above, naturally, can be referred to a tribal culture – where statues and masks were intended for a well known ritualistic practice, and carved on the basis of a precise (and socially accepted) canon.

Primitive tribal art, in fact, since it doesn’t have an aesthetic purpose, finds its deeper meaning the moment it satisfies a precise symbolic or practical function, and serves the single individual, the family clan and the social group it belongs to.

This is not the place for an in-depth analysis of the hermeneutic of the image in tribal art, but certainly there’s no doubt that the representations of naked figures occupy an important place, and that they are charged with solid iconographies and fascinating allegorical narrations. 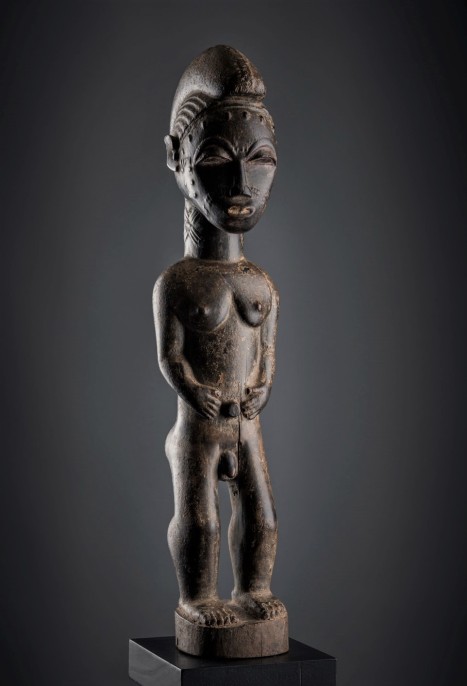 And, in my opinion, the archetypical element that characterizes the symbolic imaginary of tribal art is not of secondary importance – at all: the representation of the naked image as close to that primeval element which is the body, sic et simpliciter .
From this issue, then, as we have said before, other symbolic values arise, first of all the ones connected to power, to the perpetration of the clan and to the will of domination.
In the meantime nothing forbids us, common Western mortal men of the XXI century as we are, to admire the beauty and the seducing mystery of such figures, so distant from our sensibility, but at the same time so close to our deeper lust for knowledge. 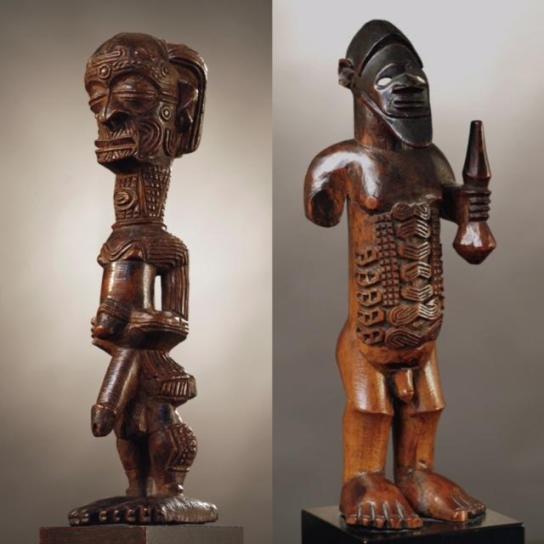