I have already drawn the limits and the aims of my research: enlightening the qualities of the autonomous statute of the iconic tribal act .
(https://artidellemaninere.com/2017/05/09/visions-make-beauty-the-image/)

What are, then, the typical elements of that act of jumping, through a visual or tactile fruition, from a state of latency to the exterior efficiency in the sphere of the perception, of the thought and the behaviour ? (H. Bredekamp)
Or, in other words, what are the essential and fundamental properties – if they do even exist! – that signifies the autonomous statute of the iconic tribal act?
In my thoughts, the pillars of this act are essentially three: the event, the vitality and the
permanence .
This work is dedicated to the the first of them, that is to say the event.

Western art iconography – which has anticipated for centuries the critical verbal analysis – dates back to two million years ago, when the first humanoid representations of graphical and plastic images appeared.
Western art, over the centuries, has never abandoned the fundamental criterion through which images are still represented, that is the criterion of description and representation.
Both religious and secular art, in fact (and apart for a few sporadic exceptions – I am thinking about Hieronymus Bosch ) have respected such modality at least until the beginning of the last century when the image changed itself into an abstract and conceptual aniconic expression.
Therefore the force of the images has always corresponded with the illustration of the sacred and the secular, were the image was either cruelly realistic or arisen from the visionary imagination of the artist.
Who doesn’t remember the sacre rappresentazioni connected to the Passion of Crist, epic reenactments of battles, landscapes, earthly events, domesticity, portraits of prelates, nobles and bourgeoises – and situations of delight, of work, of tenderness, but also of fear and dread.
The history of Western iconography is full of paintings, sculptures, medals, engravings and artifacts which have a lot to say on this matter.
The image which has accompanied the iconic act of Western art is, essentially, a representative act through which the artist described or transfigured what he knew.
This is not the case of the iconic tribal act.

In the context of the tribal art the image, represented essentially by plastic artefacts, is an event; therefore its purpose is not a merely descriptive one, but it corresponds to the event, to what is happening, and the whole perspective shifts from diachronic to synchronic.
Not having a descriptive nature, the images rejects the time-space dimension and become an event – immanent to what it describes.
The image and the sacred correspond in the mediation with the forces of the invisible that regulate the events of the world.
The iconic tribal act, therefore, underlines an autonomous statute in the exact moment when it gives up on describing what it cannot be described, and creates images/event essential to connect the world of the visible with the invisible forces of the sacred.
This is one of its fundamental characteristics: the image, either a mask, a statue or another ritual object, is a vehicle/event of the sacred, an invisible and unintelligible force, nevertheless able to powerfully regulate the individual and – especially! – social life of the whole ethnic group it belongs to.
This is why only a few elected people can take care of the images which mediates the sacred, and this is why such images can be contemplated only by the initiates: their force goes beyond every possible repair, and their intrinsic iconic act is a powerful proof of the power of the invisible.

But if the image corresponds to the event, what are the consequences that this fact implicates in the definition of the autonomous statute of the iconic tribal act?
First of all, the peculiar attribute of atemporality , that is to say, to use a Western classification method, of the hic et nunc .
However, this category of the here and the now needs to be declined into its specificity of meaning.
Atemporality doesn’t mean at all, in this context, stillness, or absence of evolution and
dynamism. Quite the opposite: it is a criteria of immanence and coincidence .
The image/event exists in the context of its manifestation, of its acting, of the way the image itself produces or doesn’t produce the desired effects and affirms itself on a temporal arc which constitutes – now we can say it – the modus operandi of the image/description.
Inescapable in the way they offer themselves to the viewer, the tribal images can, in that moment, play the part they were created for, and they couldn’t care less for anything else, northey would desire to last any longer in time and space.
This is the meaning I have given to the word “atemporality”, and it’s easy to understand how this is going to codify a peculiarity and not, instead, a limit of the tribal images/event. 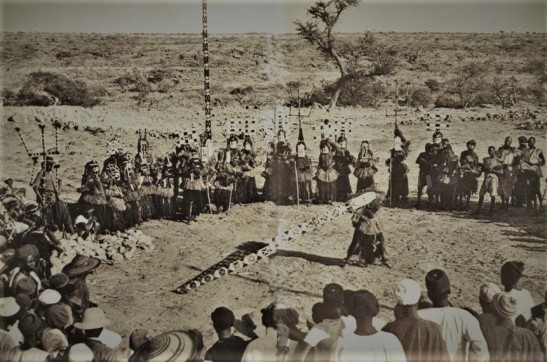 Dogon The Dance, “Art and Ritual of Africa” by Michele Huet

In the light of what I have just written, the more or less explicit theories which relegate tribal art – and, consequently, its images – to a destiny of missed evolution, creative immobilism, or, even worse, of reiterate derivative repetition, have no foundation at all.
If the authentic tribal art – and, to be more specific, the African one, is especially anchored to the hic et nunc , it seems clear that its iconographic evolution shouldn’t be interpreted by using a space/time parameter, typical of the characteristic statute of Western art, but rather on the basis of completely different epistemological categories – which are going to be the focus of a following work.

It is almost unnecessary to emphasize, now that we are approaching the end of these
digressions, that the image/event needs to be identified as something peculiar to its original contest, and the definition of the autonomous statute of the tribal iconic art refers specifically and totally to the artworks created in that contest and with the original tools, the artworks designated for the original ritual.
Three times I have repeated the word “original”, and not by chance: the Western world,
completely isolated from the context in which those artworks were born and of course ignoring their objectives, couldn’t but regard them as simple exotic objects, at first with a mixture of inquisitiveness and disgust, and then with increasing attention and regard, especially on the light of the economic value that certain works have gained on the international market.
By doing so, however, the entire autonomous statute of the artworks has been wretched, and, in other words, more or less deliberately re-absorbed inside the statute of the Western images.
With this work, and with the following ones, I aim to try to give that tribal artworks their autonomous iconic statute back – since their originality, their fascination and their beauty have already been recognized for decades.