In various works, Nadine Martinez, scholar in History of Arts and Ethno-Aesthetic at Sorbonne University (Paris), examined the issue concerning the allocation of works to Tellem and Dogon, not least, in her essay – very critical – on the exhibition “Dogon” at Quai Branly Museum, curated by Hélène Leloup (2011/2012).
Leaving out any kind of polemic, the question “ Which family the Dogon and Tellem Arts belong to? ” is particularly interesting, and gives room to significant implications.

Opinion simpler and more diffuse is that the Tellems anticipated the arrival of the Dogon on the Bandiagara cliffs, so where there were Tellem, then came the Dogon.

According to the current historical knowledge, the first Tellems reached those cliffs after the wars of the Wagadou empire, known in Europe as the Kingdom of Ghana, situated in the south-East area of nowadays Mali and Mauritania (Despite its former name, that area actually has nothing to do with today’s Ghana). The settlement of that population occurred between VIII and IX century A.C, but according to some historians some archeological evidence revealed that the settlement could be anterior to that period.
The traces of that population, and their unknown culture got lost around XVI century, due to the arrival of the Dogons around 100 years before.
Working on three types of identification methods, i.e. the iconographical, stylistic and historical ones, Martinez raises many questions: major part of those are still unsolved.
Given that the stylemes present in the Tellem sculptures can all be found in the Dogon statuary, it is worth asking questions:

a- Dogon have taken as a model Tellem’ works?
b- Tellem have carved on behalf of Dogon?
c- all the works are actually Dogon’ production?

These are importance questions, as we can see, and Martinez tries to give temporary answers ; may be it is better to say that she tries to give interpretation, through a particularly ethno-aesthetic approach.

In this study, Martinez has particularly investigated thoroughly a specific type of objects in a peculiar styleme.
She’s actually interested in sculptures with “personnages aux bras levés adossés à un plan”
That choice is not fortuitous, and is not motivated by a personal taste. The sculptures where we can see raised hands, often leaned on a plane, are actually the typical plastic representations of the Tellems. It’s worth reminding that the plastic production of these latter is less rich than the one of the Dogons.
This representation is however interesting because it expresses a stylistic continuity between the Tellem and the Dogon.

Thus, comparing the type of sculptures described before, and since those sculptures are carbon-14 dated, Martinez observes that they have the same stylistic characteristics, and they represent the same entities as those referring to the Dogons mythology.

The anachronism is quite obvious, and the study asks the following question : “Who is really represented in those sculptures ?” How is it possible that objects which are separated by 8/9 centuries represent the same reality ? How could the Tellems be aware of those mythic figures, which are represented in their sculptures ? How is it possible if according to the Vulgate the Dogons reached those cliffs, along with their complex cosmogonist symbols, many centuries after the settlement of the Tellems ?

The historical research helps us to provide a clarifying interpretation about the above questions.

The Dogons might have left and then turned back to a place where they used to live themselves, in particular the cliffs. We can therefore imagine that Tellems and Dogons could hypothetically be part of a same family ; one branch of that family had always remained on the cliffs, and the other branch turned back after a long period.
The Dogon oral traditions account for two directions : the first path regards their arrival from the East, between Tombouctou and Mandé, through the rivers ; the second path is their return towards the East, from Djenné.

According to Germaine Dieterlen and Diarra Sylla (1992), when the Dogons arrived from Djigou and Tombouctou, and then they moved to Wagadou (a region of Mali in the far-south/east of nowadays Mauritania), they probably splitted into two groups : one group directed towards the cliffs, the other group went to Mandé.

The second group could have lived in Dogoro region and Sibi for more than 1200 years, then they moved back to Ségou and Djenné, turning back again in their ancient starting point.
Analyzing the symbolic side, the sharing of the cult of Binou, which founded the Dogon groups, literally means “Gone and turned back” (Montserrat Palau-Marti, 1960).

This symbolic element has put down roots in the Dogon culture, and suggests that there is a clear reference to the migrations of that population, probably due to wars, quarrels, and religious questions, as well as the searching for a hospital place, with a soft climate and a safe environment.

On the historical and religious side Solange de Ganay (1941, 1942) gives us a fundamental information : “…Some Binous come from Mandé, the region from which the Dogons emigrated around Xth century : others have been found in the cliffs of Bandiagara”.

On the base of this interpretation, i.e. the Dogons are the original inhabitants of the cliffs, reconstituting the original Tellem family group , more than 1000 years after the initial settlement, we can provide a historical/artistic explanation of the Dogon panel.

The panel (ex Charles Ratton old coll. Parigi), which is considered a true Dogon opera and is dated according to the execution style around XV/XVI century, unveiled some surprises to a scientific committee during a deep analysis session.
Under the supervision of Milano and Napoli universities, the wooden pieces have been analyzed through the 14C-AMS technique (radiocarbon dating with mass spectrometry and accelerators).

Leaving out the technical aspects of the final report, the result of the dating process of the wooden panel is as follows : 1330 d.C. with a possible deviation of 30/50 years.

With regard the dating of the wood works, according to R. M. A. Bedaux, the Dogon usually sculpt in fresh wood, as it’s easier to work with and that, moreover, the seasoned wood is hard to find in the Dogon lands, as indeed throughout Africa .
For Bedaux, it follows that the age of the sculptures must be considered not far from that of the wood used for the realization of the same  (Des Tellem aux Dogon: recherches archeologiques dans la boucle du Niger (Mali), in  Archeologia Africana, Milano 1992).

This explains the analysis that we exposed before, and it enables us to understand that in 1300, and even before, there have always been Dogon ethno-aesthetic elements in a culture that we have always called proto-Dogon or Tellem, mistakenly considering them as two different cultures. 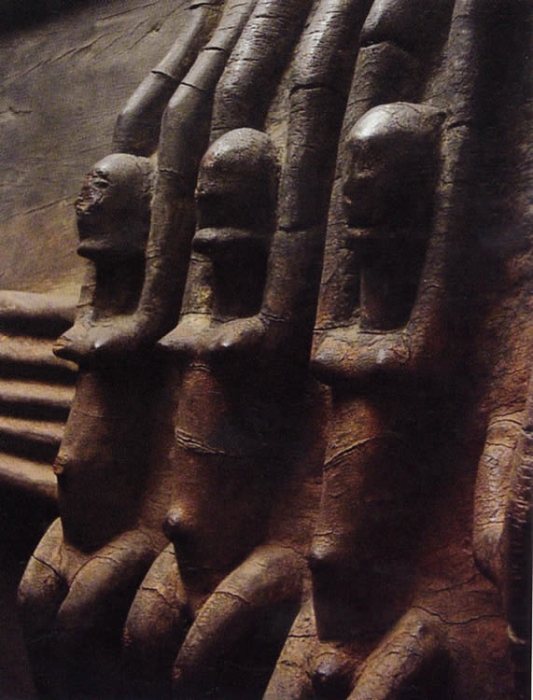 This is one of the reason why the panel can also be looked at as a historical document rather than just a despicable art work made by the population of the cliffs.