Up until present day, there wasn’t a living human being who had already experimented the effects of a viral pandemic. We are suffering, both individually and collectively, the effects of an unknown planetary phenomenon, whose outcome is still uncertain.

Still I believe that humanity as a whole will be able to survive if, like the mild and salvific prince Myškin of Dostoevskij’s “The Idiot”, we keep at the core of our own aspiration the harmonic unity of mankind. In this sense a spiritual, interior, authentic and pure beauty will really be capable of saving the world. Everyone, consequentially, must try as they can to share their peculiar gifts, no matter how, but driven by this common purpose. I will try to do my part with my research on African Arts, believing that knowledge is, in itself, a gift of beauty.

In Africa the word contamination is not simply used when talking about tremendous epidemics. Another form of contamination, which interests ethnographic, cultural and artistic categories, concerns people whose artefacts show mutual stylistic influences. People who share bordering territories and whose artistic/religious creations, although certainly unique and autonomous, are crossed by common artistic/expressive references. This evidence breaks the diffuse stereotype which loves to imagine ancient African people as isolated, enclosed in their own world while, instead, their drive towards cultural and commercial exchanges was strong – sometimes even compelling.

An example can be made by looking at the artworks produced by the Bwende, Bembe and Teke people, which occupy an area spread between the Democratic Republic of Congo and the ex-French Congo whose capital city is Brazzaville. Another demonstration, this one, of the scarce foresight of Western Colonialism in the moment of the definition of African geographical borders. 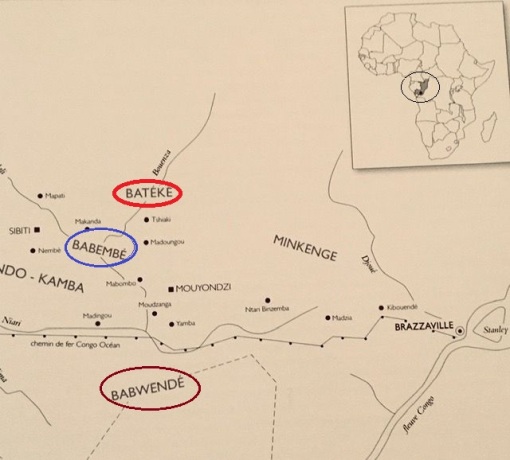 In the antiquate terminology the ethnic denomination was anticipated by the prefix BA-, which means people.

The Bwende belong to the Kongo ethnic group and their territory, as in the case of the Sundi, Dondo, Kamba and Bembe people, embodied the Nsundi province. They separated themselves from their motherland around the end of the XIII century, through a migration which brought them to the extreme Central-Western spur of which nowadays is the Democratic Republic of Congo, that land which extends itself up to the Atlantic Ocean, towards the Angola region of Cabinda and the Republic of Congo. Enclosed between the neighbouring Teke and Bembe, the Bwende have kept, as I said before, their own artistic autonomy, as their sculptural production clearly shows – and despite the fact that certain stylistic devices are shared by all of the three cultures, especially for what concerns the postures of their carved figurines. 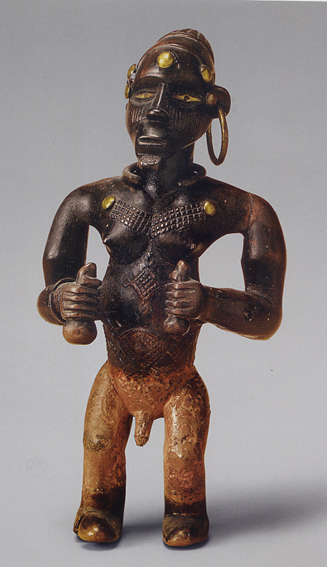 Wooden Bwende statuettes, like the Bembe ones, are generally between 14 and 40 cm tall.

In particular, this figure shows an erect position characterised by short legs, slightly flexed knees and bended arms forming a 90 degrees angle. It was associated to healing and divinatory rituals. The closed mouth, the bearded chin, the wide shoulders, the rounded feet without toes, the scarification signs covering the face, the upper body, and the back, are Bwende peculiar traits – as well as the asymmetrical headpiece. The figure, called ntelemono mufwokama, was linked to the cult of the ancestors. He holds two calabash vessels between his hands, which may have been destined to healing practices.

The artistic production of this population was centered around funerary rites, for which they realised imponent mannequins, called niombo, to use as reliquaries. They consisted of anthropomorphic figures made of fabric, which were paraded around before the burial, amongst the sound of drums and trumpets. 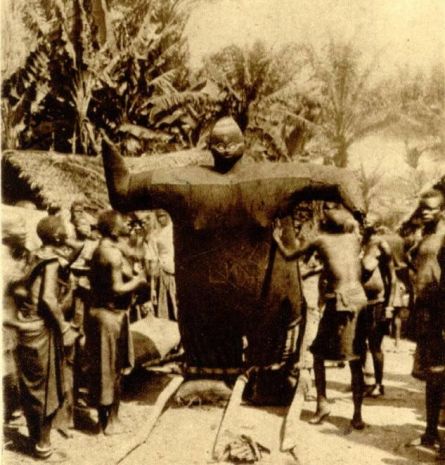 An early ‘900 postcard, portraying a Bwende funeral with the exhibition of a niombo, a large reliquary figure made of fabric. Picture by E. Karlman, Kingovi Manianga Region, 1925.

The same kind of funerary rites were celebrated also among the Bembe, whose fabric reliquary figures, less impressive, were called muzidi or muziri (see picture below). A precious evidence of the relationship and intercultural contaminations between the two ethnic groups.

The Bembe and the Bwende people belong to the same Kongo ethnic division. The former occupy the extreme Southern extension of the Republic of Congo, from the territories West of Brazzaville to the region between the Sibiti and the Mouyondzi, bordering with the neighbouring Bwende and Teke territories.

The Bembe practiced an animist cult, and their artistic expressions can mostly be identified by anthropomorphic wooden figures which were used to commemorate and celebrate their ancestors. Such ancestors were portrayed in different poses, holding several kinds of objects: knives, calabash vessels, wands and rifles. The body was frequently characterised by deep and complicated scarification patterns, like in the figure below.

Despite the multiplicity of carving sub-styles, the ancestor figures, called nkumba, shared a small size. The main iconographic typologies were essentially two: those used to represent the deceased chiefs of a community – and therefore to preserve the memory of a clan-, and power figures which were used by the diviners for medical purposes. When the owner of a statuette passed over, the figurine was consecrated by inserting, inside a small hole which was carved in correspondence of the anus, a magic mixture composed even by micro-parts of the deceased body. This way the nkumba, having incorporated the spirit of the ancestor, was transformed into an ancestral figure called nkiteki. At that point the nkiteki was kept in a corner of the family household and protected by the oldest male of the clan.

Originally from the left side of the Congo river, the Teke people, occupied the territories North of Congo up to the Gabon area and beyond the river into the Democratic Republic of Congo, in the Kinshasa area. The ancient Teke, mentioned by the first European explorers with the names of Anzichi, Ategue, Moteques, Meticas, Bakono, Tio, were a belligerent population, definitely not immune to slave trade. In 1887 Dr. Mense described the ethnic group, and attributed their figurines to certain Wuum people carvers – Teke ancestors who meddled with Kongo people along the Southern bank of the Malebo river, and who received commissions by neighbouring Teke villages.

In 1880, a Friulian explorer (naturalised French), Pierre Savorgnan de Brazza, concluded a treaty with the Teke king, Makoko of Mbé. The treaty formally provided a truce with France but, de facto, had the purpose of annexing the Teke territories to the colonial empire.

Mokolo of Mbe, Teke king, with his family. In the shrine on the right, the treaty signed by Pierre Savorgnan de Brazza.

The king feared an alliance between the Whites and his enemies, the Kota people of Southern Gabon and the Kongo people. The current capital city of the Republic of Congo, Brazzaville, takes its name from the Friulian explorer.

Teke magical statuettes, predominantly showing male attributes, are hard to compartimentalise inside precise categories, because only the recipient of the sculptures and the one who materially created them were able to understand their intrinsic power and their ultimate destination and use. The sculptures more representative of the ancestor cult were charged by relics which materialised their spiritual and supernatural power. We are aware of at least two kinds of statuettes connected to the ancestor cult (and defined, by the historian Jan, as biteki, bitegue or itio): those which had been consecrated, and which physically represented the ancestor (buti), and those which weren’t given either relics or accessories (nkiba).

The bilongo which can be seen in the image above, is the clay container of the consecrated statuettes, “vehicle of ethical, political and even legal values” (Lecomte e Lehuard, Batéké, Les Fétiches, 2014, p. 41)

This barbed fetish, 35,5cm high, with its classical striped scarification patterns, is a sculpture of great expressive quality. This, however, is of secondary importance. What really gives value to this magical object are the medicinal components which are included into the conical bilongo, made of clay and resins, a rarity among the Teke  artistic production.

“The bearded Teke fetish  with typical striated scarificatio patterns has a sculptural quality. This is, however, of secondary importanc- The medicinal ingredients included give “value” to these charms, which produced in great number by these people from Congo Brazzaville. The fetis first carved with a square cavity, which is later filled with special ingredien prescribed by a religious specialist, who sometimes includes piece of his bear with the mixture. A layer of resin containing more magical substances is adde and reddish tukula is rubbed into the wood to secure the power of the charn Denise Paulme suggests that these figures are kept by children for security Les Sculptures de l’Afrique Noire). At birth, a piece of the placenta of the nev born is mixed with tukula and placed in the hollow. The child then carries figure until adolescence, when it is discarded. As Teke fetishes are quite com mon, it is rare to find one as finely carved as this example.” (Linda Sigel, African arts, autunno 1971, vol.5, n.1) 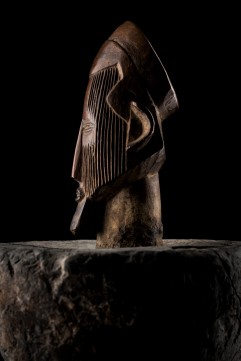 The great artistic quality, proper of the creativity of the Bwende, Bembe and Teke people is illustrated by the artworks here reproduced. The purpose of this article is, however, a different one: showing the presence of a stylistic contiguity in the carved production of people separated by historical events, whose creative imaginary survives in their symbolic and artistic interexchange.