There are some pieces that are not resolved in mere contemplation but, on the contrary, they ask you with the force of their expression.

One of these is a mask that I recently had the fortune to see by my friends Denise and Beppe Berna, collectors and dealers of international level which excel in competence and intellectual honesty … a good fight…. especially today where it’s easy to see how prevail, sometimes, small selfishness and meanness spread. The mask was collected by Edward Klejman in the 60s and even a cursory looks very old, very used, with all the typical signs of a long and fond of using, as the tribal restoration which has been submitted. Collected in Nigeria by Klajman in a border village of population Ogoni with Ibibio, in the Niger Delta, the mask can be attributed to Ogoni, even if we can find artistic influences of Ibibio / Anang (see Masks mfon ekpo ). This ancient mask, called karipko, was linked to the practices of the propitiatory agricultural cycles as well as the management of special events surrounding the village. Used by young acrobatic dancers who performed at the sound of a sacred drum, expression was propitiatory fertility and fortitude. Terminated the “historical / descriptive” pratics, I will now focus again on what I find most fascinating in this powerful mask. As you can see, the element zoomorphic with those bulging eyes side coated with kaolin and horns confluent on the top, are predominant elements of sculpture, almost identifying elements.

But try to brighten eyes at the center of the mask: the two slots on the bias at the top, where it begins the beautiful nose … immediately zoomorphic element disappears to make the vision of a powerful and expressive human face ending in the mobile jaw restrained by ties made of plant matter, typical of Ogoni culture. The anthropomorphic element takes over and the whole expression, first animal, is now anthropomorphic.

How not to ask questions? First. Those two cracks are only the result of the need to wear the mask, as structural elements to ensure the vision of the young dancing? No, because it would explain the apparent intention of a humanoid face with distinct features such as the mighty nose and mouth, with the maxillary part even of small teeth carved. Second. Conversely it was prevalent in the artist’s intention anthropomorphic. None, because the eyes globular put so stressed and the presence of horns exclude de facto this intentionality. Third. The artist, as in many other cases have made a synthesis of elements of animal and human as is often found in many forms, not only in Nigeria, but also, for example, the Ivory Coast: I think of the four forms of the rite Goli (https://artidellemaninere.com/2015/01/01/baoule-people-kple-kple-goli-mask-ivory-coast/) . No, not even this explanation is unsatisfactory because in this picture there are no animals and human elements in toto! In this mask coexist in harmony, but well divided and separated element is that the zoomorphic anthropomorphic … just watch the mask in the first globular eyes and looks into the cracks and then the buffalo central … the animal disappears to make way for a pure human facial expression, expressive on the verge of brutality. 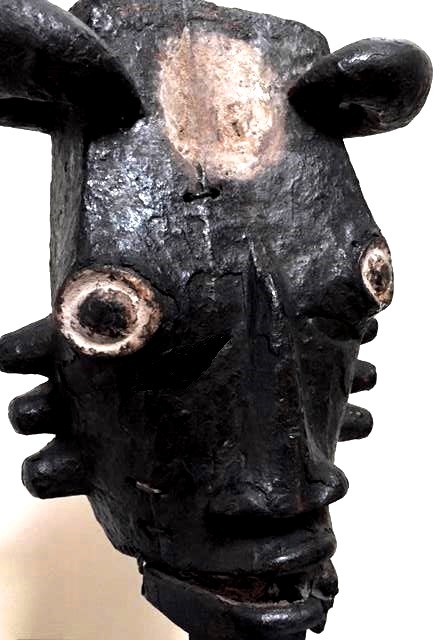 And this poses serious problems of interpretation in my opinion, beyond the mask and invest, unlike both the meanings aesthetic / expressive, but also symbolic / hieratic. Articulate in such a unique entity both animal and human is the expression of a high synthesis of thought that goes beyond the intentions plastic / artistic to assume, on the contrary a phenomenal wealth of imagination in which the synthesis of human / animal is achieved, but with respect for autonomous prerogatives and peculiarities. As if the mask intends to emphasize a common ancient origin of the two entities, which then, however, the evolution in the course of its millennial path discriminated, making humans and animals two entities distinct though in some ways complementary to each other. And this complementarity if for us, western people, has practically disappeared, for Ogoni culture and for the unknown artist who carved the mask is on the contrary well immanent, since the life of man, for that culture and for that society, not It is separated from that of the animal. This mask, which to my knowledge is unicum artistic celebrates both the complexity of a refined thinking through a ‘artistic expression of rare evocative power.